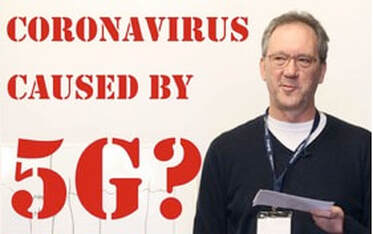 HEALTH/TECHNOLOGY - Thomas Cowan, MD
On this 10:40 minutes video, some of Dr. Thomas Cowan key points were recorded for those who may not have any means to access this video. Dr. Thomas Cowan is another brilliant doctor whose credentials and video can be seen via link.

In this video, Dr. Thomas Cowan, M.D. hypothesizes that Coronavirus may be history repeating itself and caused by 5G. This video was recorded while Dr. Cowan was giving a speech at the Health And Human Rights Summit in Tucson, Arizona on March 12, 2020.

Dr. Thomas Cowan: “In 1918, there was the biggest epidemic, the Spanish Flu, Steiner was asked, what was this all about and he said viruses are simply, excretion of a toxic cell. Viruses are pieces of DNA or RNA, a few other proteins; they bud out from the cell. That happens when the cell is poisoned, they are not the cause of anything….. When the cells get poisoned, they try to purify themselves by excreting debris, which we called virus. If we go to the current theory of viruses, called exosomes and the late head of the NIH giving a talk on the complexity of viruses, you will see this is perfectly in line with the currently thinking of what a virus really is.

So what happened in 1918? In very pandemic in the last 150 years, there was a quantum leap in the electrification in the electric field in the earth, In 1918, late fall of 1917, there was an introduction of radio waves around the world. Whenever you expose any biological system to a new electric magnetic field, you poison it, you kill some and the rest goes into a kind of suspended animation, so interestingly they live a bit longer and sicker. World war II starts with the next pandemic with the introduction of radar equipment all over the earth, blanketing the entire earth with radar fields. First time humans have ever being exposed.

In 1968, there was the Hong Kong flu and it was the first time that the earth has a protected layer in the Van Allan Belt, essentially integrates the cosmic field in the sun and the earth from the moon, Jupiter, etc., integrates that and essentially distributes that to the human beings of the earth. And, we put Satellites radiating active frequencies into the Van Allen Belt, within 6 months; we had a new viral pandemic. Why viral? Because the people are poisoned, they excrete toxins, they look like viruses, people think it is a flu epidemic.

In 1918 epidemic, the Boston Heath Department decided to investigate the contagiousness of this, so believe it or not, they took hundreds of people with the flu and they suck the snot out of there nose, infected into the healthy people who didn’t have the flu and not one time could they make the next person sick. They did this over and over again and they were not able to demonstrate contagion.

They even did it with horses that had the Spanish flu, they put the bag over the horses and the horse sneeze and they put the bag over to the next horse and not one horse got sick. You can read about this in a book called The Invisible Rainbow by Arthur Firstenberg, who chronicles all steps in the electrification of the earth, how within 6 months, there was a new flu pandemic all over the world.

When you hear the normal explanation how did it go from Kansas to South Africa, in two weeks, so the entire world got the same symptoms at the same time, in spite of the fact that the mode of transportation was horse back and boats. And, there is no explanation for it; they just say we do not know how that happened. But when you think about it, with those radio waves and other frequencies that some of you have in your pockets and wrists, you can send a signal to Japan and it arrives instantaneously. So, anyone of you who do not believe that there is an electromagnetic field that communicates globally within seconds is not paying attention to this….

There has been a dramatic and quantum leap within the last 6 months with the electrification of the earth and I am sure a lot of you know what that is, it is called 5G, where they now have 20,000 radiation emitting satellites, just like the radiating ting in your pockets and wrists that you use all the time that is not compatible with health…. That is a water destructing device and for anyone of you who say we are not electrical beings, we are just physical matter, then do not bother doing an EKG or an EEG or a nerve conduction test, because we are an electrical beings and the chemicals are only a bi-products of electrical impulses…..
Any body wants to guess, where was the first completed blanketed 5G City in the world was?

So, when you start thinking about this, we are in a existential crisis, the likes of which human kind have never seen ….. this is something is unprecedented. The putting of hundreds of thousands of satellites in the very blanket of the earth, this actually has to do with the vaccine question.

The susceptibility has to do with how much metal you have in the body, as well as the quality of the water in your cells. So, if you start injecting aluminum in people, they become receptors for increasing magnetic fields and that is a perfect storm for a deterioration for the species which is what we are not experiencing.

I am just going to finish with one more thing which is a quote from Rudolf Steiner and by the way, this was from 1917, so it was a different time, “In times when there were no electric currents, when the air was not swarming with electrical influences, it was easier to be human, for this reason, in order to be human at all today, it is much necessary to expand much stronger spiritual capacities that was necessary a centaury ago.” So, I will just leave you, with whatever you can do to increase your spiritual capacities, because it is really damn hard to be human being these days.”