The Miracle Man
João de Deus, known as the MIRACLE Man, is the most powerful healer in the world since Jesus Christ. He had this gift since at the age of 9 years old and has been doing his healing work for 65 years.

Coloured Stones
Thousands of years ago, ancient cultures treasured coloured stones and gemstones and adorned themselves with these gems as jewellery for fashion and prestige. These gems were also used for healing purposes.

Ancient Texts, The Upanishads
In the ancient Vedic Indian texts, the Upanishads, the essence of Vedic wisdom is that we are not only our physical body, but by the phenomenon of a continuum, from the various levels of existence, the layers of the physical, non-physical or the pranic state (from prana – Sanskrit for life force – energy), the mental and the higher levels of consciousness.

The Subtle Body
Within the subtle body, there are 72,000 channels or subtle pathways, which are known as nadis (energy points) where the life energy / prana circulates through out the body. The nadis / subtle pathways are invisible vessels and they are of a psychic reality devoid of attributes. As in the subtle nadis, there are five subtle currents of the vital energy of the prana known as the pancha pranas that circulate the outer body. 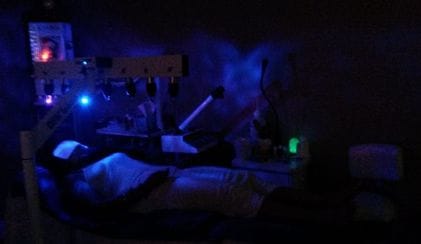 João de Deus / John of God Crystal Bed
João de Deus does not preach to anyone on religion. Neither does he tell one how to live. He does not talk about science. He hardly knows how to read or write; yet still, he is the most powerful healer in the world. He has healed millions of people.
His only message is, the message from Jesus Christ taken from the Gospel of John (book 15, verse12) “That you Love one another.”

The Crystal Bed comprises of 7 Crystals which are cut to precision and the crystals are aligned to the seven chakras / energy centres of the body. Along with the seven crystals, there are the seven colours of light (frequencies) relating to the 7 chakras and the frequency of the lights being on and off  (flashing) changes.

How much time is required for a Crystal Bed Treatment?
At the Casa de Dom Inácio, treatments are booked in intervals of 20 minutes, 40 minutes or 60 minutes. Usually, more than an hour treatment per day is not recommended.

One lies under the Crystal Bed adorned with white clothing (as healing energy is easily entered through white clothing) and with eyes closed with a white tissue or cloth over the eyes. Soft soothing background music is being played as the session is in progress. The feeling varies for different people and many have their own versions and experiences. Not to worry if there is none, each individual is unique and some maybe more sensitive or intuitive than others. However, generally many said that they experienced some altered state or being relaxed totally afterwards.

My experience
As for me, it is mythical, with deep states of meditation attained in a few minutes. Such altered states of consciousness and just seeing and knowing things are indescribable. Your experience will be your truth.
One of my sisters, Satie Narain-Simon, who is also a Guide from the Casa and a Daughter of the Casa de Dom Inácio, is also is a firm believer and can attest to this testimony with her experiences. We have been going to the Casa de Dom Inácio since 2005.

The uniqueness of this Equipment
The João de Deus / John of God Crystal Bed is not like any other complimentary or alternative medical device that can be purchased anywhere else. Permission to purchase this equipment is only given by John of God to the person, while John of God is incorporated in Entity and not while he is in person. Once in Entity, he knows everything about the person, the intention and where the Crystal Bed is going to be used. Blessings and permission were given by the Entity to use this Crystal Bed. The Entities of Light from the Casa de Dom Inácio will connect with this Crystal Bed and do the work here too.

Contact Us
Please feel free to contact us for more information on John of God Crystal Bed Therapy.