It is commonly observed that some people tend to be more prone to develop health issues like infections and allergies more commonly than others.

Also, some people tend to develop more severe symptoms of infections or other diseases while some develop very mild symptoms that often require no treatment. These variations in the incidence of diseases could be explained with the help of the Terrain Theory vs Germ Theory.
The Terrain Theory and Germ Theory try to explore the primary causes of diseases that could be responsible for disease development and progression. These theories also help us understand why some people are at a higher risk of developing diseases while some tend to be healthier throughout their life.

Here is a brief discussion about what Terrain Theory and Germ Theory mean and what they reveal about the risks of developing certain disorders.

We will also discuss the differences between these theories to get a better idea of the causative factors of health problems. 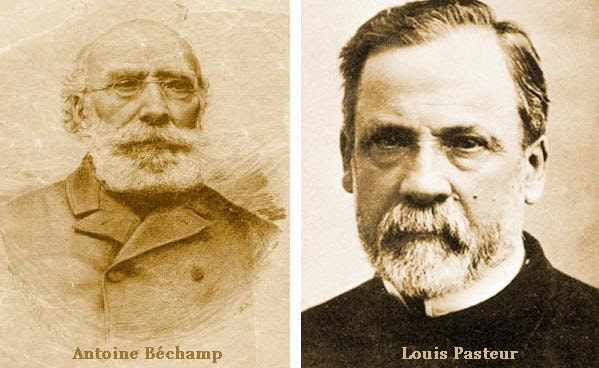 Terrain Theory vs Germ Theory: Introduction
The ‘germ theory’ versus ‘terrain theory’ is an argument that differs on the cause of diseases. The germ theory proposes that it is the germs that we need to avoid or worry about for preventing diseases. It also proposes that there is a need to find ways to protect ourselves against germs like bacteria and viruses with the help of medications that attack and destroy them.
​
Terrain theory, on the other hand, argues that if your body is in perfect balance, then germs, which are actually the natural part of the environment, could be dealt with naturally by our body without causing any sickness.

Introducing Louis Pasteur and Antoine Bechamp
Louis Pasteur, a French chemist (1822-1895) was the pioneer of germ theory. The teachings of traditional western medicine and practices are based on the doctrines of Louis Pasteur. The ‘Germ Theory of Disease’ was one of the theories proposed by Louis Pasteur through which he claimed that certain species of microbes from the external sources invading the body are the primary causes of infectious diseases.

The terrain theory was proposed by Antoine Béchamp (1816-1908) who believed that germs have a tendency to seek their natural habitat, which is the diseased tissue. Hence, they attack only those tissues or hosts / bodies that are weak and damaged, which is why they cannot be considered the primary cause of diseases.

While both these theories are important, they differ in terms of suggesting what we need to do in order to stay healthy.
What is the germ theory?
Pasteur, in 1861, published the germ theory of diseases, and by 1865, he proved that germs are the common causes of diseases. He believed that germs were called so because they appeared to be growing or germinating in the tissues causing diseases.
​
What is the terrain theory?
According to the terrain theory, if your body is weak, it serves as a host for the invading microbes to reside and cause illness.

This theory makes sense in today’s times as it indicates that improving the immunity could increase the body’s resistance to pathogens. Developing a strong immune system by eating a nutritious diet, following a healthy lifestyle, and using nutritional supplements could offer a strong line of defence against the agents of infections. Moderate exercise, adequate rest, and a positive attitude can also support the immune system and protect you against the disease. 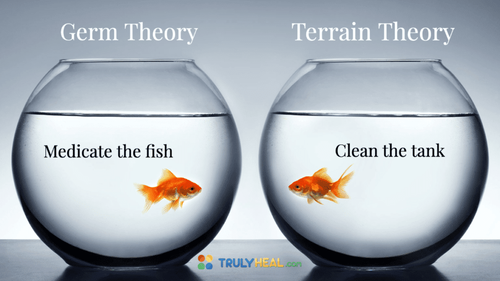 Understanding the differences between germs theory and terrain theory and where it stemmed from?
The modern healthcare system is based on the germ theory. The treatments and therapeutic approaches to the management of most illnesses are aimed at eliminating the primary causes of diseases, which mean bacteria and viruses, according to this theory.

Patients are often prescribed antibiotics and antiviral drugs to treat systemic infections while the local skin infections are commonly treated with antifungal and antibacterial creams.

However, it is important to understand the relevance of the terrain theory in today’s times. Due to the poor soil and the prevalence of toxic metals and chemicals in the air, foods, and water, our bodies have become weaker.

Additional factors like mental stress, lack of nutrients in the diet, increased intake of junk foods have made our body’s defences weaker putting us at a higher risk of developing more serious diseases.

Working on the ‘terrain’ is considered an effective approach to reverse these unhealthy changes.

Strengthening your body by adopting the concepts of terrain theory modifies the body’s internal environment making it inhospitable to pathogens. This would reduce your risk of diseases to a great extent and allow you to stay fit and healthy for years after years.

It should be noted that even Pasteur had somewhat accepted the ‘terrain’ theory. His last words suggested that the microbes are nothing and the terrain is everything.

Functional medicine based on Terrain theory
Optimizing your terrain with the functional medicine approach takes forward the concept of ‘terrain’ theory. Here are some generalised strategies you can adopt to improve your body’s internal ‘terrain’ to be able to stay healthy:

Anti-inflammatory diet
Avoiding the intake of sugars and unhealthy fats could minimize inflammation in the body thereby preventing the tissue damage that could otherwise serve as a suitable host for invading pathogens.

Reduced toxic load
Making efforts to support the elimination of toxins from your body would reduce toxic load and prevent tissue damage. This would restore the normal functions of all organs and help you avoid diseases.

Exercise
Regular exercises and physical activities can improve your overall fitness and enhance your immunity. It would boost the body’s ability to fight diseases by increasing microcirculation through all tissues while ensuring all parts of the body receive an adequate supply of nutrients needed to fight germs and toxins.

Optimizing gut microbiome
Optimizing gut microbes would enhance the absorption of nutrients in the intestine and improve the body’s nutritional status.
In combination with immunity-boosting nutrients and herbs, it would also boost your immunity and keep you safe and protected against disease-causing agents.

Conclusion
Following the concepts of ‘terrain’ theory are key to the prevention as well as treatment of diseases. Strengthening your body defences by improving diet and following healthy lifestyle habits would make your body strong enough to resist future disease development especially caused by viruses and bacteria.